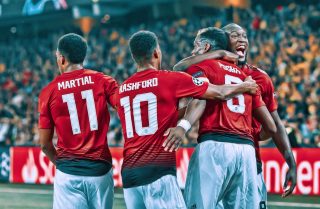 Romelu Lukaku has responded brilliantly to criticism after losing his place in the Manchester United line-up.

It wasn’t all his own doing but the striker has struggled this season, even under previous manager José Mourinho, who brought him from Everton in 2017.

Ole Gunnar Solskjaer’s arrival, however, saw several players rejuvenated and playing out of their skin. Marcus Rashford being one of those took Lukaku’s role as centre-forward and nobody can have complaints about that.

The caretaker boss clearly prefers to attack with pace, but he has done everything but block Lukaku from getting back into the team. Solskjaer knows he needs all his best attackers firing if United are to finish in the top four this season.

Lukaku scored twice in the wins against Southampton and Crystal Palace last week to take his tally for the season up to 13. His brace ensured that United secured all three points against the Saints, in a dramatic Premier League encounter which finished 3-2.

He will be aiming to surpass teammate Paul Pogba who is still United’s top scorer on 14 goals, despite missing a penalty at the weekend.

“He is a bright boy,” Solskjaer said, as quoted by the Manchester Evening News. “And he knows what his strengths are and his strengths are going towards goal, finishing, running in behind. And, of course, when we get him too deep in the pitch maybe that doesn’t suit him at times.

“But he has responded fantastically to everyone who wants to criticism him because there is no one who practises finishing as much as he does. And he scores so many goals in training. I have said it so many times in the press as well, if we should do a score chart in training, he is one that scores the most by a mile.”

The signs are good for Lukaku now. They weren’t not too long ago.

United have a big game on Wednesday night against PSG in the Champions League and need to overturn a 2 (away) goal deficit. It’s an uphill climb but with so many players absent, our only hope stands with the likes of Lukaku being at their best.