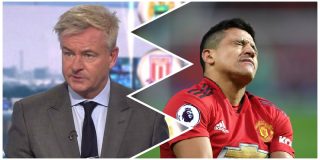 According to reports, Sanchez is now set to be out of action for six to eight weeks, after being forced off early in the second half in United’s 3-2 victory over Southampton.

NEXT: Alexis Sanchez injury is a blow for him but less so for Man Utd

Chile’s El Mercurio claim that the former Arsenal player has suffered knee ligament damage, which could rule him out until the end of the season.

Sanchez has struggled for form and been knocked back by several injuries in a disastrous period since his move last January, and Sky Sports pundit Nicholas believes his time at Old Trafford is all but over.

“I think they’re running down the clock with Sanchez. I think he’ll be gone in the summer – that’s the reality,” Nicholas told SkySports.

“They’ll look at things and say ‘what have you done? Not very much’, and he gets injured a lot these days. You have to look at what United have got coming through and they’ve just given Martial a new deal so when he’s fit, he’ll be playing.

Sanchez had the huff with Arsenal over a contract so what type of mood is he going to be in when he doesn’t get a game? I don’t think you hang about for that and I think Sanchez will be gone in the summer.

“They can sell him, get some money, get him off the wage bill and they can get somebody else in. It might even be a younger version.”

That ‘younger version’ may just be in the form of Jadon Sancho, the 18-year-old Englishman setting the Bundesliga alight at Borussia Dortmund.

The Mirror claim United boss Ole Gunnar Solskjaer is willing to break the club’s transfer record to secure the services of one of football’s brightest prospects.

Sancho looks the ideal replacement for Alexis, who has been the shadow of the player he once was since his arrival at United. The youngster could potentially line up in a front three with Marcus Rashford and Anthony Martial, a frightening prospect for any defence in world football.