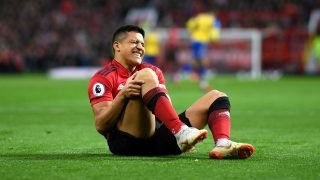 With Manchester United’s resources already stretched during an injury crisis, Alexis Sanchez had been faced with the most critical spell of his almost anonymous Old Trafford tenure.

Now would come his chance to finally kick-start his floundering United life and silence the critics with the rediscovery of the form that made him such a key man for Arsenal. Now, at last, he might be the player we thought we were getting.

The Chilean just cannot catch a break. Having limped off during Saturday’s win over Southampton, Sanchez was upstaged in attack by a teenage defender in his replacement Diogo Dalot. The young Portuguese did more in two minutes than Sanchez has managed in over a year. That, more than anything, sums it up.

Now, to quite literally add insult to injury, Sanchez’s season looks over, ruled out for up to eight weeks with knee ligament damage, according to The Times.

Then again, so bad has he been that you could say he’s been MIA for the last 14 months anyway…

You get the feeling that this could be curtains not just for his season, but for his United career.

It says a lot that news of his injury will not be greeted with much dismay and doesn’t even feel like a blow, even though it is hard to feel anything but empathy for Sanchez. Has there ever been a more stark example of a player to go from world class to woeful in such a short space of time?

It wouldn’t surprise me if we never see him in the Red of United again. This latest setback epitomises the catastrophe that has been Alexis Sanchez at Old Trafford. His best days – already behind him – look increasingly numbered.

For whatever reason the transfer just hasn’t worked out and, if truth be known, it’s caused more problems than it solved.

The hope was the positive effect from Ole would have brought the best out of him in the way that every other player has been liberated. Sadly, it simply has not. It now looks like a signing simply made to get one over on City, and the mob from across the road will no doubt be thinking that they dodged a bullet with this one.

Sanchez only got back into the team because of United’s crippling lack of numbers and the injuries to Jesse Lingard and Anthony Martial. With neither set to return in time for PSG, Tahith Chong or Angel Gomes will likely be thrown in for a baptism of fire against the heavyweight Parisian giants.