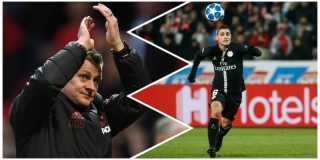 Manchester United have a lot of work to do if they’re to force a comeback against Paris Saint-Germain on Wednesday night.

Ole Gunnar Solskjaer’s side went into the first-leg full of confidence, but fell short after two first half injuries hit the side and forced the manager into changes to destroy our game plan.

NEXT: Solskjaer praises Man Utd goalscorer who scores more than his teammates in training

United know they face an uphill climb in Paris, but matters have been made worse with an injury crisis hitting the squad, and the Reds are also without Paul Pogba after receiving two yellow cards in the first-leg.

It remains to be seen whether Anthony Martial will return but it’s likely he will remain on the absentee list, alongside Alexis Sanchez and several others.

With Nemanja Matic out injured along with Ander Herrera, Scott McTominay could be joined by Andreas Pereira and Fred in a midfield three. A possibility that fills us with nothing but fear against top opposition like PSG…

Romelu Lukaku will continue to lead the line with Marcus Rashford, who has recovered from his ankle injury, though both attackers will need to be at their very best to unnerve the Ligue 1 champions.

After his brilliant performance from the bench on Saturday, Diogo Dalot showed that he can play in a more advanced position than right-back. He’s quick, likes to get forward and his crossing could compliment Lukaku nicely. The Portuguese youngster is in contention to start, though if United start in a 4-3-3 formation we reckon Solskjaer will opt for the more experienced Ashley Young.

PSG are still without talisman Neymar due to a metatarsal injury, but they have a number of other players capable of causing United trouble, as seen at Old Trafford.

Edinson Cavani missed the first-leg through injury, but he could return for the big night in Paris.

It depends on how many chances United can create. Romelu Lukaku is in form at the moment, so if given the service he should score.

I just see our midfield being overrun and having little possession as a result. The personnel we have available to play in the middle don’t come close to PSG’s midfield. Marco Verratti will be rubbing his hands together!

So, yeah… unfortunately I can’t see United winning this one. Top four is our best chance of Champions League qualification.

The match will be televised live on BT Sport 2, therefore, BT Sport subscribers will be able to stream the match online via the BT Sport app.