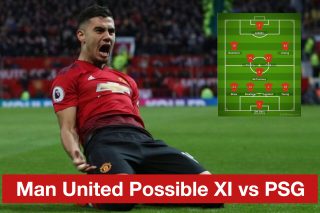 Manchester United have a gigantic task on their hands as they travel to face Paris Saint-Germain in the Champions League. In the first leg, United lost 2-0 with Presenel Kimpembe and Kylian Mbappe scoring the goals, which were both created by former United midfielder, Angel Di Maria, who didn’t receive the warmest of receptions from the Old Trafford faithful.

Since then, United have been hit with an injury crisis, with Paul Pogba already suspended for the second leg after being sent off at Old Trafford.

Below, we have predicted Ole Gunnar Solskjaer’s line-up. He has some big decisions to make.

The best goalkeeper in the world. It goes without saying at this stage, so he walks into the team.

Although I would start Diogo Dalot at right back, Solskjaer will likely opt for experience with Young. In the last few games Chris Smalling has proven to be our best partner for Lindelof, so we shouldn’t expect another face to come in, while Shaw has made the left-back role his own this season.

This is definitely an area of concern. We are without our three best midfielders against a top side, and this trio don’t get near the team when everyone is fit. Marco Veratti and co must be rubbing their hands together.

Lukaku deserves his place after scoring four goals in his last two matches and with Rashford, who has recovered from his ankle injury, we need the striking duo to be firing in all cylinders if we have any chance of coming back in this tie. Don’t be surprised to see young Chong start, with Alexis Sanchez and Anthony Martial both out injured.