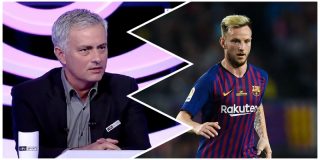 José Mourinho has praised the many talents of Barcelona and Croatia midfielder Ivan Rakitic.

The 30-year-old scored the only goal in Saturday’s El Clasico as Barça moved 12 points clear of Real Madrid.

And, Mourinho was on beIN SPORTS to offer his analysis on the game as a pundit.

Chief football writer for The Independent Miguel Delaney was complimentary of Mourinho and his insight.

Mourinho is a class pundit.

“He’s one of the most underrated players in the world,” Mourinho said, as quoted by talkSPORT.

“Fantastic in all levels; he defends, he compensates for Messi, he runs and he’s sensible with the ball at his feet.”

Rakitic has been linked with a summer move to Old Trafford, as per The Sun, with Barcelona bringing in mega-money signing Frenkie De Jong from Ajax.

Aged 30, Rakitic is not likely to come cheap and his current contract doesn’t expire until 2021.

Mourinho was pointing out that Rakitic doesn’t get the praise he deserves due to playing in a side that boasts Lionel Messi, Ousmane Dembele and Luis Suarez.

However, he was also able to squeeze in a dig at United midfielder Paul Pogba, who shared a troubled relationship with his former boss at Old Trafford.

The Frenchman is the epitome of a modern footballer and Mourinho sarcastically suggested Rakitic needs to work on his social media output, something Pogba is renowned for…

“For me, Rakitic needs to improve his Instagram and his social media because in this moment this is very important and he is not very good on that, he is good on the pitch,” Mourinho added.

“He’s a fantastic player at every level. He does defensive work on the right hand side to compensate Messi, he runs miles.

“In ball possession, he’s simple, and he’s effective. He is one of the most underrated players.”