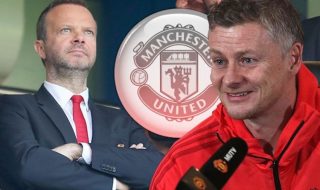 When Ed Woodward named Ole Gunnar Solskjaer caretaker manager in December, it was everyone’s understanding that he would return to his Norwegian club Molde at the end of the season.

That was before he drastically turned United’s season around with great football and results, enough to put the Reds in contention for a top four finish – an objective that José Mourinho would describe as a miracle before being sacked.

So, we’re not in a situation that everyone believes Solskjaer will get the job on a full-time basis and NOBODY saw that coming. It’s a testament to his hard work that Ole is about to land the biggest job in world football.

Premier League sweetheart Mauricio Pochettino was the favourite to succeed Mourinho long-term, but Spurs have dipped in form and could face a top four battle with United in the league’s remaining weeks.

According to the Evening Standard, United staff are wondering why executive vice-chairman Woodward has not named Solskjaer as the club’s next manager already.

They claim Woodward is giving himself ‘breathing room’ in case United’s form tails off before the end of the campaign, though ESPN’s Mark Ogden says Solskjaer is currently the only candidate for the job.

While Solskjaer has made it an easy decision, Woodward doesn’t need to rush an announcement. He was given the job until the end of the season — without plans to manage United any longer — so let’s see what we finish with in May.

United are sat in fourth, a point ahead of Arsenal, and Solskjaer knows qualifying for the Champions League is the main objective now, as well as winning the FA Cup.