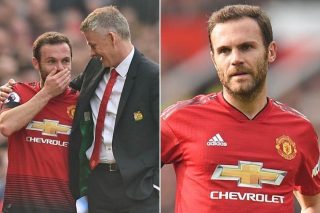 Mata, who is currently out with a hamstring injury, watched on as United secured three points to move back into the top four.

NEXT: Potential Man Utd XI vs PSG: Midfield an area of concern, Tahith Chong to start

“I’m writing this today after one of the strangest weeks that I’ve had, on an individual level, in years. As I told you a week ago, I’m not used to being injured. The week has crawled by without being able to train with my teammates. I’ve been around them each day, of course, as I am going through my recovery at the training ground, but it’s not the same.

“On Saturday, we won again with a comeback against Southampton. They had a good game at Old Trafford and I really hope that they manage to stay up. It was a game of amazing goals in which, fortunately, we were able to get our noses in front. It is weird for me to celebrate goals in front of the television or in the stands like all of you, but in the end I was obviously very happy :-). It was really important to win this game to help us towards our target for the end of the season, given that our rivals aren’t slacking.”

Mata will also miss United’s Champions League encounter with PSG on Wednesday night. The Reds could do with an experienced creative player as they look to overturn a 2 goal deficit in Paris.

“This week, we have two more games… which will probably go by slowly for me again, although I will be supporting the team and carrying on with my recovery process,” Mata added. “I’m feeling good about it, every day I’m a bit better and I am working to be back as soon as possible.

“PSG and Arsenal are both top opponents to be facing this week. The game in Paris is particularly tough due to the first leg, but we are United and we never surrender. We have to believe that it is possible. Later, we will visit the Emirates again in a vital game as we fight for a Champions League place.”

It must be infuriating being a footballer out injured and missing big games.

Especially now, at United, with everyone clearly enjoying themselves and winning football matches. All of the players want to be part of that and it’s partly down to the atmosphere Ole Gunnar Solskjaer has created.

Mata is currently in talks with the club over a new contract, so if he wants to stay you can be sure he’s trying to get back fit as quick as possible to help the side meet its objectives.

With Paul Pogba suspended and Mata out injured, as well as Jesse Lingard and Ander Herrera, Reds could see Andreas Pereira play a more advanced role against PSG this week.

The Brazil international was much more effective in the second half against Southampton on Sunday after being instructed to push further forward.