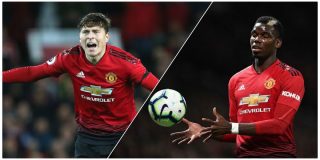 With the news that long-serving club captain Antonio Valencia is set to leave Old Trafford in the summer, as per BBC Sport, Manchester United will be looking for a new leader of the pack.

In Valencia’s absence, it has been his right-back cohort Ashley Young that has donned the captaincy, but if Valencia was never a good fit as skipper, then Young is also not suitable. With respect, despite his status as a senior player, 33-year-old Young should not be starting every week but is not the man to lead United into the future.

Here are four possible contenders that we think could succeed the armband-wearing Ecuadorian.

The favourite for many, Herrera has long been regarded as United captain in all but name. A passionate, driven leader both on the pitch and off it, the Basque possesses a love of the club so rare for foreign exports elsewhere.

Herrera often fronts up when others shirk away and his tenacious, all-action style at the heart of the engine room makes him the ideal candidate. His penchant to wind up opponents whilst driving the team on bears an uncanny similarity with a certain Mr Keane. A United captain in all but name, he has been majestic under Ole Gunnar Solskjaer having been a virtual ever present under the Norwegian. Crucially, he speaks English – which certainly helps!

De Gea’s current deal expires at the end of next season, but a sticking point over wage demands appears to be holding up talks of an extension.The next logical step, then would be to make De Gea the next United club captain.

Not only would it be reward for committing his future to the club, he ticks all the boxes, and seems perfect for the role as current skipper Valencia nears the end of his United career – it could even happen sooner if the Ecuadorian is no longer considered an automatic starter. It would also give the club’s hierarchy the perfect excuse to deservedly make him our highest earner.

Lindelof has captained Sweden at Under 18, Under 21 and Under 23 level, and has long been touted as a skipper-in-waiting of Janne Andersson’s senior side. The Iceman has been a calm, composed, mature and totemic figure at the back for United this season, going from strength to strength as he comes of age.

He has shown leadership qualities and held the back four together in difficult circumstances at Selhurst Park. There is a romantic notion that the captain of your team should be either the snapping, snarling midfield warrior or the rock-hard immovable object in the heart of the defence. I never would have said this a year or even six months ago, but Lindelof has shown he could fit the bill as captain

Stripped of any future captaincy role during his long-running feud with José Mourinho, but Pogba is a man reborn in a new lease of life under Ole. Hugo Lloris may have officially been the France captain during his side’s World Cup triumph last summer, but Pogba was credited as the motivational speaker in the dressing room during Les Bleus victorious campaign.

That’s all well and good, but is he disciplined enough? Also, let’s not forget that here was a man who many still accuse of getting Mourinho the sack with his antics off the field and performances (or lack of) on it. We earlier penned on these pages how Pogba has emerged as the new front runner for the armband.

Who will be the man to lead Ole’s Manchester United into a bright new future?