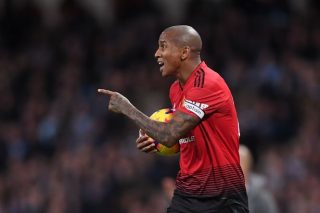 Manchester United face an uphill challenge to qualify for the next round of the Champions League.

Paris Saint-Germain won the first-leg 2-0 at Old Trafford and it will be a tough ask to stop their amazing forwards from scoring again.

Ashley Young admits all of the doubters have a right to question United’s chances, but he wants them to be remindful of how the Reds have been numerous times written off in different situations during the season only to have proven the critics wrong.

United have been handed the blow of an injury crisis and, with Paul Pogba suspended for the game on Wednesday night, could be missing up to 10 members of the squad.

Young probably wants to stress that United know what they’re up against but won’t give up, despite going into the game with a two-goal deficit.

“We’ve got to go over there, win the game and score goals. I’ve got every faith if we defend well and if we create the chances that I know we can do, we can win the game.

“We’ve got to go out there and win the game. We can’t worry too much about them, it’s all about us.”

Under previous managers it became evident that United had no real footballing identity and focused way too much on the opposition. The more pragmatic days.

Now Ole Gunnar Solskjaer wants his players to use their own ability for other teams to fear, rather than the only way around.

But against PSG we’re playing at the highest level. We need to be at our very best to stand any chance.