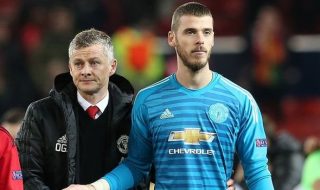 David de Gea has yet to put pen to paper and sign a long-term deal with Manchester United.

The Daily Mail claims he wants to stay but his agent, Jorge Mendes, is trying to get more money out of the club, despite already being offered a massive £350,000 per week.

United fans have shown nothing but loyalty to De Gea down the years. The club itself  has always backed him, even when pundits were questioning his ability in the Premier League as a scrawny youngster from Spain.

Highest paid goalkeeper in the world

For starters, the contract being offered by Manchester United would make David de Gea the highest paid goalkeeper in the world. While they evidently hold a strong negotiation stance, it doesn’t seem right that his entourage are reportedly pushing for more money when United have offered so much.

Though this is a problem created by making Alexis Sanchez the club’s highest earner last year and now Mendes wants the same for his client.

United are showing here they rate De Gea above every goalkeeper in the world by offering such a deal, and I think he deserves it but just f***ing sign the dotted line so we can get on with things.

Unless he fancies a move to China or PSG in the summer, this money won’t be offered elsewhere.

De Gea knows he is valued by the club and fans more than any goalkeeper at another club. There’s always been a brilliant relationship between the goal posts and stands at Old Trafford.

The Spain no.1 arrived in England and struggled immediately to adjust his game from playing in La Liga for Atletico Madrid. But Sir Alex Ferguson and Eric Steele didn’t panic, they knew De Gea had something special and stood by him.

He’s won back-to-back Player of the Year awards at the club and has been United’s most important player of the post-Ferguson era. It’s frightening to imagine how poorly we would have done under previous managers without De Gea.

However, it’s time to give something back, especially if he wants to stay as reported. The contract on offer is not one to put your nose up at…

United on the right path

I know it has been said before but I haven’t felt this strongly about it since Fergie retired.

United know by now, after three managerial failures, that change is needed. Not just in the hot seat, but throughout the entire club.

On the pitch we’ve seen a huge improvement over the past two months. Caretaker manager Ole Gunnar Solskjaer is getting the best of his players, playing attractive football and is getting incredible results along the way.

This United side – with some improvements – can challenge for silverware. That only gets more difficult if we lose De Gea at some point, though he should want to ensure he hangs up his gloves one day being able to reflect on more success at United.

Hopefully, like some of his teammates, he has been encourage by Solskjaer and plans on putting pen to paper soon rather than allowing his agent take the biscuit with contract negotiations.