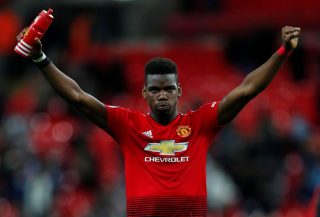 Current captain Antonio Valencia is on the verge of leaving the club this summer. He will be a free transfer in the summer and is currently out injured.

Lago Agrio is a very humble town in Ecuador. When I was a child, I never imagined travel to Europe. Thanks to God for letting me play 10 years in the best club in the world: @ManUtd. Now I am focused on my recovery so I can end the season playing at Old Trafford! pic.twitter.com/ftqMLCDWlr

NEXT: Sandro to re-emerge as Manchester United target

According to The Sun’s Neil Custis, Ole Gunnar Solskjaer sees Pogba as his long-term replacement.

Former manager José Mourinho stripped Pogba of his vice-captaincy duties at the beginning of the season, claiming he did not have the right character but Solskjaer obviously sees things differently.

Pogba has flourished under the Norwegian – playing his best football to date – and he showed plenty of leadership in a successful World Cup campaign last summer.

Whoever gets the armband beyond this season, it should go to a player who sees his long-term future at Old Trafford.

If Pogba and his hungry agent are going to flirt with other clubs every summer, that is not someone you want representing your club as captain.

But that’s only an ‘if’ for now. It’s just hard to trust someone like Mino Raiola who is always on the lookout for the next big move.

The France international has what it takes to captain a side like United, but he must want to be part of the club’s future. I’m not doubting that he doesn’t but it wouldn’t surprise me if Real Madrid came knocking given his form of late.