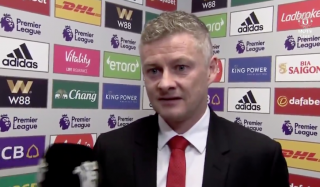 United leapfrogged Arsenal and moved to within three points of a faltering Tottenham team after falling behind, going ahead, getting pegged back before finally prevailing.

After winning a five goal thriller against Ralph Hassenhuttl’s brave but ultimately beaten Saints, Solskjaer told the BBC: “It was one of those games, it had everything. It was an open game and they came here to beat us. We should have been 1-0, 2-0 up in the first five minutes. They settled down and scored with two unbelievable strikes. My team did fantastic and the boys did great in the second half.

“The belief is there, they have gone so long without losing games (domestically) and are raring to go. They want to get on the ball and the confidence is high. They were class finishes from Romelu Lukaku and I am so pleased for Andreas Pereira.

“Rom is a goalscorer, he keeps practicing every single day and has quality. When we changed to two up front that helped him as well. We had some great play at times, 3-2 we did it the hard way. That’s why we are turning grey.

“We have done fantastically well away from home but we go to PSG with the belief, we have nothing to lose. We will give it a go. This club has done so many great comebacks, the tie is not done.

“The dressing room is bouncing at the moment.”

But there is still a lot of work to be done before the celebrating can truly start. Sure, it’s a relief to come from behind or win a game in dramatic circumstances, but United have come so far under Solskjaer it would be a shame to throw it away.

He added: “I’ve got to enjoy every single second in this position. They deserved it for the energy, belief. Normally the Stretford end suck the ball in and today was the same. Great finishes. It does help with the support behind the goal. The fans were absolutely fantastic as always.”

And, like he usually does, Ole strikes the right chord with the fans.

I can’t tell you how much I love this man. Ole’s at the wheel!

Late winners and great finishes – Ole knows all about those! 😉 #MUFC pic.twitter.com/njCyT3CYHw