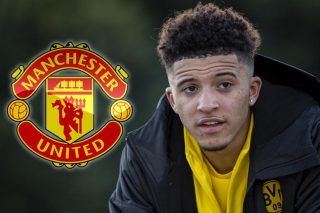 According to The Mirror, Manchester United are set to engage in a tug-of-war with Champions League rivals Paris Saint-Germain over the signing of Borussia Dortmund winger Jadon Sancho.

The report claims United are willing to make Sancho the most expensive English player in the game’s history, therefore, breaking the club’s record fee paid for a new signing.

Sancho go cost around £100 million this summer, more than what United paid for Paul Pogba in 2016, and almost double the cost of the current highest-priced English player Kyle Walker.

But we allegedly face stiff competition from PSG, who currently lead United 2-0 on aggregate, with the second leg of our Champions League last 16 encounter just days away.

Moreover, PSG are renowned for having tons of money and they won’t push aside easily if Sancho is a genuine target for the club this summer. At United there will be less competition for places, with the squad currently without a specialist winger on the right.

The idea of playing with Kylian Mbappe and Brazilian superstar Neymar is likely to turn heads as far as any youngster is concerned, while at United he could help build a formidable attack already consisting of Marcus Rashford, Anthony Martial and Paul Pogba.

Throw Belgium’s all-time record goalscorer into the mix while you’re at it!

The prospect of signing Sancho is an exciting one. We need a player on that flank willing to take on defenders, run past them with tricky, while also scoring and assisting goals.

Getting better and better at Borussia Dortmund 💫 pic.twitter.com/Qk00zqxumB

United have shown very promising signs under Ole Gunnar Solskjaer, and the idea of adding another talented youngster to our squad fills me with excitement. Sancho genuinely looks like one of the hottest prospects in world football right now.

Of course we want a bit of that at Old Trafford next season!

Time will tell if he wants a move back to England…