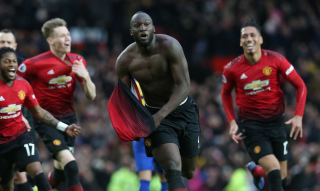 Romelu Lukaku scored twice as Manchester United prevailed by the odd goal in five in an Old Trafford thriller against the spirited south coast side.

The much-maligned Belgian striker has now hit four goals in his last two games to leave the Reds breathing down the necks of third-placed Tottenham. United were frustrated for long periods by Ralph Hassenhuttl’s tenacious and dogged Saints in a topsy turvy contest.

United fell behind, went in front, got pegged back again before Lukaku popped up with a pivotal, potentially priceless winner two minutes from time as Old Trafford erupted.

Lukaku told BBC Sport: “We knew we had to win the game today and did it. This was not our best game but we have to be happy.

“We created a lot of chances in the opening ten minutes but did not win the game until the last moments so that is frustrating.”

He passed up the chance of hat-trick with a late penalty that Paul Pogba took – but subsequently failed to score with, his spot-kick saved by Angus Gunn.

Lukaku added: “I am a striker and I wanted Paul Pogba to score the penalty, he has been on a good run but he has been an important player for us. I was happy to let Paul take the shot.

“I was focused on the win and help my team-mates, that is the most important thing, not always me scoring. The manager gave me another chance today and I was able to take that chance.

“We have to look one game at a time and are working hard on the training ground. We are ready for the challenge.”

Hopefully this is a sign of things to come for the rest of the season. If we can get Lukaku and Rashford both scoring goals together, we stand a very good chance finishing fourth or maybe even third.

Lukaku has got a hard time this season — some of it justified — but he appears to be working hard to set the record straight. Today he scored his 12th Premier League goal of the season!