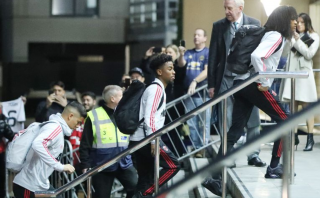 It looks like Anthony Martial will have no involvement when Manchester United take on Southampton today.

The Frenchman wasn’t seen with the rest of the match day squad at the Lowry Hotel as he’s still not 100 per cent after being out injured, as reported by The Mirror.

He missed the win over Crystal Palace on Wednesday with a groin injury, but the Reds still won 3-1 thanks to goals from Romelu Lukaku and Ashley young.

United are also without Jesse Lingard in attack, with the England international recovering from a hamstring injury which reoccurred in the scoreless draw against Liverpool.

Caretaker manager Ole Gunnar Solskjaer is taking each challenge as they come, however, he will be desperate to get his key players back fit.

Martial has 11 goals and two assists to his name this season. Sadly, he won’t be abl to add to his tally against Southampton.

No Anthony Martial as the #mufc squad arrived at their hotel tonight but Chong, Gomes and Garner there https://t.co/lrUnGjVIFX

Solskjaer warned that he wouldn’t rush any of his players back from injury in his press conference on Friday. It would be silly to do so against lesser opposition anyway, but United cannot afford to be complacent.

The Reds are also without Nemanja Matic, Ander Herrera and Juan Mata, which puts a test to the squad’s depth if they’re to fight for a top four finish.

It remains to be seen how United will set up against the Saints. I’d like to see a youngster like Chong come in while Martial is out injured – he should be fit for the next game.