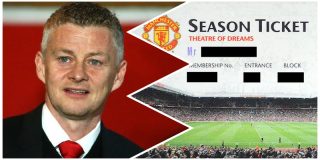 Ole Gunnar Solskjaer is set to appear in a Manchester United promotional video urging fans to renew their season tickets for the 2019/20 season.

But there’s one thing missing… fans might want to be sold on tickets by knowing who will be in charge next season. (Ha!)

NEXT: Solskjaer admits being involved in plans for Man Utd beyond this season

Fans will renew either way but how awkward would it for Solskjaer or anyone connected to the club seeing him on such a commercial after Mauricio Pochettino has been appointed manager?

Solskjaer, who has a contract until May, is favourite to get the job. He has been near-faultless since becoming caretaker manager and has revealed that he is having a say in talks about the club’s plans beyond this season.

Now he is central to the marketing push to ensure fans purchase season tickets for the new season.

But after winning 12 of his 15 games since taking over from José Mourinho, it’s no surprise that ESPN claim he’s the only candidate for the job.

“I’ve done a photo shoot or a video shoot on season tickets, so I’m pleading for them to get their season tickets,” Solskjaer said at Friday’s press conference, as quoted by ESPN.

“If it’s me as a supporter or manager I don’t know, but they should still buy their season tickets because the club is going somewhere.”

It’s going to be hard for any manager to come in and better what Solskjaer has done in such little time. And for that reason, as well as him being the cheapest option for the Glazers, it’s probably time to accept this as reality.

Solskjaer, however, was keen to stress that there is no done deal.

“That’s just part of being here, the commercial [side],” he added. “Part of being a player here as well.

“Suddenly you’re not here anymore and you see your picture. That’s how it is. It’s not strange doing it. If my kids see a commercial with me in it and I’m back home in Norway that’ll be strange, probably.”