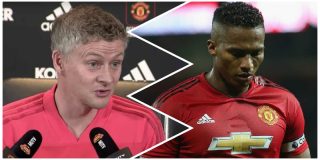 If Antonio Valencia plans to stay at Manchester United beyond this season, Ole Gunnar Solskjaer’s response to a question about his contract will come as a blow.

The Ecuadorian, who has been a great servant to the club down the years, will see his contract expire at the end of the season.

There’s not a lot of talk about him being offered a new deal, so journalists put the question to Solskjaer at Friday morning’s press conference.

“He’s still not 100% fit, still working to get back fit and he’s had a fantastic career here at Manchester United and England,” the United manager is quoted by Manchester Evening News.

“One of the Premier League winners left in the dressing room but I’m not sure if Manchester United and Antonio will agree on the next year so it depends if he gets back on the pitch in the next few months but he’s the captain, great servant to the club so hopefully I can get him on the pitch and show what he can do.”

To be fair, Valencia probably isn’t expecting a new contract offer from United. It’s been clear for some time that his time at Old Trafford is coming to an end.

Ashley Young, who is far from ideal, gets in the team every week ahead of the former Wigan winger, and I don’t think that will change even if he returns to full fitness.

There’s also Diogo Dalot in the frame, a youngster from Portugal with the world at his feet. He’s got the potential to be United’s right-back for many years to come.

MEN add that United have until 5pm tonight to trigger Valencia’s contract extension.

Another indication that this will be his final season at the club.