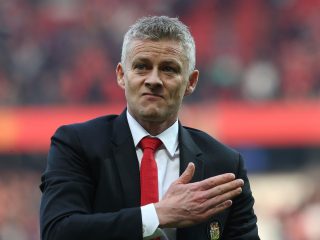 Ole Gunnar Solskjaer is the only candidate being considered for the next permanent manager’s job at Manchester United.

According to ESPN, no other manager has been approached to discuss the job at Old Trafford since Jose Mourinho was sacked in December.

NEXT: Italian reports claim Man Utd have made held talks for 19-year-old wonderkid

Solskjaer has moved into pole position to be named permanent manager ahead of Tottenham boss Mauricio Pochettinho, after completely rejuvenating the mood at Old Trafford since his interim appointment.

Hierarchy at Old Trafford are said to be delighted with the dramatic transformation seen in the players since Solskjaer’s arrival, with performances almost unrecognisable from those just weeks earlier under Mourinho. Marcus Rashford, Anthony Martial and Paul Pogba are among many who have played some their best football at the club under Solskjaer.

United have won 29 points from a possible 33 in the Premier League since the Norwegian took charge, and progressed into the FA Cup quarter finals with impressive away victories against Arsenal and Chelsea.

A 2-0 home defeat in the Champions League remains Solskjaer’s only blemish as United boss, however it is understood that this result will not deter the club away from his inevitable appointment.

The Reds face Southampton on Saturday as Solskjaer’s men look to build on an impressive eighth straight away win at Crystal Palace last night.