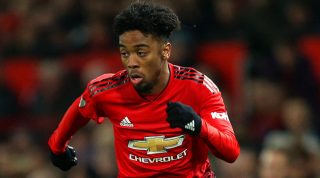 If any result could have made that possible, it was Chelsea’s 2-0 win over Tottenham Hotspur. With Mauricio Pochettino’s side sitting adrift of both teams above and below them in 3rd, a loss was required to drag them back into the race for Champions League football, as they now sit only five points ahead of Manchester United, seven ahead of Maurizio Sarri’s Chelsea (they have a game in hand), and four ahead of North London rivals and weekend opponents Arsenal.

What will likely be a fiery early kick-off at Wembley will give United an inevitable and extremely important opportunity to gain on opposition at Old Trafford. Ole Gunnar Solskjaer could use a helping hand in the race given the loss of many that preceded his appointment as interim manager.

United also need to recover a two-goal deficit against Paris Saint-Germain to keep their Champions League hopes alive, in a match that will occur shortly after this weekend’s match. Solskjaer will be watching clips of Barcelona’s famous comeback against the French side while looking at his injury-ravaged squad, and as such, will be determined to ensure that Southampton, a resurgent side under new manager Ralph Hassenhuttl, are not his banana peel this weekend.

The 28-year-old goalkeeper was left helpless for Joel Ward’s consolation goal against Crystal Palace and will rue the loss of another unnecessary clean sheet. He will be looking to rectify that in a home match where United should be expected to earn a clean sheet.

Regardless of the goal, which he took well, Ashley Young has been poor over recent weeks and should be rotated for Dalot, who, at 19, has plenty of upside. One might question Solskjaer’s likelihood of resting Young given his reluctance to do so over recent weeks, but with PSG forthcoming, the odds as high as they can possibly be for the Portuguese youngster to start a Premier League match.

Smalling has returned to United’s defence with the form he showed under van Gaal, as if Jose Mourinho never arrived at the club alongside his struggles over recent years. Keep it up and Solskjaer boasts quite a partnership at the back.

The ball-playing defender continues his excellent form and will look to keep his form on a high before the daunting midweek match succeeding the weekend fixture.

One of United’s best performers over recent matches was rewarded with a very impressive assist for Romelu Lukaku’s opener, and he should continue his excellent form with another excellent performance against Southampton.

The nature of Scot Scott’s performances over the last two matches have made it feel like Nemanja Matic was never injured, and, keeping it up, the academy graduate should continue to cement his place in the squad.

No news surrounds Ander Herrera after his injury in the Northwest Derby, which makes a return for Saturday’s match unlikely. Solskjaer will want to maximise the likelihood of him starting against PSG and part of that may entail a rest against Southampton. Fred was entirely poor against Palace, which should open the door for Pereira to return. Reservations about Pereira in this role could even open the door for James Garner to make his first start after debuting against Palace.

Shifting over to the right side of midfield after left-footed Fred was introduced to the side, Pogba still shone and picked up a deserved assist. However, he remains most suited to playing on the left side of the midfield three and, being ruled out for the PSG match next week due to suspension, he will almost undoubtedly be on the pitch this weekend.

With the following two players likely to play together up front, Solskjaer will not hesitate to try out a 4-4-2 Diamond. Other players such as the aforementioned Garner and Fred, or even Alexis Sanchez, could start here, but I have chosen Gomes, who has hovered around the first team since Mourinho’s first season and is most suited to exactly this role.

“Rashford is fully fit now. I’ll probably start him,” said Solskjaer, as per ManUtd.com, ahead of Saturday’s match. The forward sustained quite the ankle-swelling against Liverpool but, given a rest on Wednesday, can now return to the side.

Lukaku’s brace ensures that, even if Marcus Rashford, Jesse Lingard and Anthony Martial all returned from their respective injuries, the 25-year-old striker would still start the match. Hopefully this is the beginning of his personal rediscovery and the goals of 2017/18 begin to return.