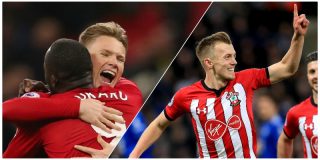 Ole Gunnar Solskjaer’s side host Southampton in a game that Manchester United should win easily.

The Norwegian has been near-faultless as interim manager but United are a point off fourth and Chelsea, currently in sixth-place, can overtake our league position by winning their game in hand.

There’s no room for complacency between now and the end of the season. Southampton know they’re in a relegation scrap and Austrian coach Ralph Hasenhüttl will be aiming for the sort of performance that could unnerve significant opposition and cause a shock.

That is what United are up against this weekend, a side looking to make a statement in their fight to avoid relegation. Every game is a test for Solskjaer now.

Moreover, the Saints now face a difficult run that now only sees them face United, but Tottenham and Liverpool in the next four league fixtures. Their best player at the moment, James Ward-Prowse, scored in midweek’s 2-0 victory over Fulham and will hope to add to his tally at Old Trafford.

Solskjaer in a strong position to get the United job beyond this season and he’s doing great to take each game as they come, regardless of tricky obstacles being thrown in his way, such as United’s injury crisis.

Solskjaer doesn’t expect to make any changes to the squad that travelled to Selhurst Park on Wednesday, with United coming away with an important 3-1 win.

“I don’t think there will be many changes,” Solskjaer said on Friday, as quoted by ManUtd.com. “It’s the last session today, but we’re not going to take any risks, so maybe Anthony [Martial], but it might just be even a few more days before he’s ready, so probably the squad will look similar to what it did on Wednesday.

“Maybe one third of them will be Academy kids – maybe even more – so that’s a good point to take out of it.”

The promising prospect of seeing some of the kids playing on Saturday will fill supporters with excitement. We take great pride in producing our own and there’s great hope for players like Angel Gomes, Tahith Chong, James Garner and Mason Greenwood.

It will be interesting to see if Romelu Lukaku will keep his spot after scoring a brace midweek, or if Solskjaer will opt to bring Marcus Rashford back into the team. Competition for places can only be a good thing and you don’t want too much reliance on one player to provide the goods up front, especially a 21-year-old.

Scott McTominay comes into the game on the back of two solid displays in Nemanja Matic’s absence. Many had doubts over the Scotland international when news broke we would be without the Serb for some time, but footballers can surprise you. Let’s hope he can keep it up.

The defence will be led by Victor Lindelof but it will be interesting to see if Luke Shaw gets forward more after recent comments from his manager following the win over Palace.

“We want him to go forward,” Solskjaer said, as per Manchester Evening News. “That’s the next step for him as well, to trust himself more often going forward. But, then again, it was down to the shape we played today because Anthony wasn’t fit.”

Shaw has made the left-back role his own this season and it’s great that Solskjaer is trying to get more out of him as a player. As long as he keeps developing and getter better, we could be looking at United’s left-back for the long haul. I certainly hope so…

He faces his former club this weekend, the one left for United four years ago, and will obviously want to show everyone how far he’s come.

We’ll have too much for Southampton.

The players should be encourage knowing Arsenal take on Tottenham this weekend in the North London Derby, knowing points will be dropped one way or other.

This is a great opportunity to make ground on those clubs above us and hopefully bridge a gap from Chelsea, though I wouldn’t put my money on Fulham.