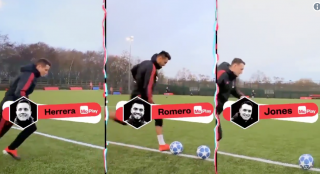 His pinpoint accuracy has earned him a world record after scoring 20 minutes in just a minute.

The previous record was 5 goals.

Phil Jones and Ander Herrera both had a go but it was the goalkeeper who did best.

Herrera was surprised by the challenge’s difficulty: “I didn’t expect [it] was going to be that tough.”

Most goals scored from the halfway line in 60 seconds…

Not too shabby for a backup goalie, eh?

Romero, however, is good enough to be first choice at most clubs. There’s not a goalkeeper in the world who would be starting ahead of David de Gea at United, which begs the question: how does Dave’s distribution compare to Romero’s?

Perhaps a challenge for another day.