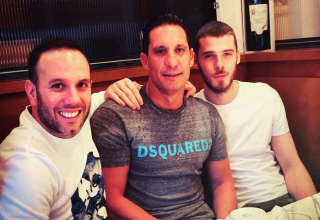 David de Gea is yet to sign a new long-term deal with Manchester United but Emilio Alverez, the club’s respected goalkeeper coach, has shared a photo on Instagram alongside the shot-stopper mentioning an ‘exciting future ahead’.

United have already triggered a one-year option on De Gea’s contract to extend it until the summer of 2020, but talks are underway between the club and his entourage to agree to fresh terms.

There were a number of contrasting reports on Thursday, but the one we decided to believe was from Adam Crafton in the Daily Mail. It states that Dave is ready to commit his future and has been impressed by the recent revival under Ole Gunnar Solskjaer.

Most of the reports from yesterday had different views on the proposed contract. Some had different figures by the Mail claim United are willing to pay De Gea enhanced wages of £350,000 per-week, while the player’s agent demands closer to £400,000 per-week.

Alvarez, however, is a frequent user on Instagram and his latest caption on the social media network may be a message showing his compatriot’s willingness to stay at Old Trafford for the foreseeable future.

The goalkeeper coach posted a picture alongside De Gea and another friend with the caption: “Friends, coffee time, excited future ahead”.

A post shared by EmilioAlvarezCoach (@emilioalvarezcoach) on Feb 28, 2019 at 9:08am PST

While Alvarez was also part of José Mourinho’s coaching staff, Solskjaer decided to ask him to stay when he came in due to his close working relationship with United’s no.1. He is also a close friend of Juan Mata and Ander Herrera.