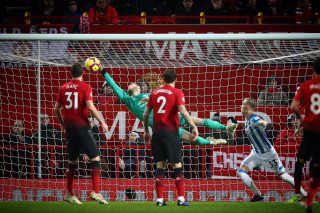 The Daily Mail understands United are willing to make De Gea the highest paid goalkeeper on £350,000 per week, though the newspaper claims the player’s agent, Jorge Mendes, is trying to squeeze more money out of the club.

But Solskjaer, standing in as interim boss, says he has not say in contractual matters. When talks get to the table and offers are dished about, the Norwegian probably has little say in the situation.

Though he can influence the decision and the Mail also claims De Gea is happier with how things are currently looking at Old Trafford.

Speaking at his press conference on Friday morning, Solskjaer was quoted by Manchester Evening News: “No updates from me, the club and David are in dialogue, hopefully they’ll agree, it’s out of my hands but I’m sure we’ll do what we can.

“David’s done fantastic since he came, the club really showed how much they wanted him back in the day when Eric and the gaffer found him, there was probably keepers there better at that time but the belief the manager showed in him with the criticism he got paid dividends, he’s been player of the year I don’t know how many years, we’re grateful to have him. Then again we’ve got Sergio and Lee, fantastic goalkeeper dept, I don’t think there’s any manager in the world who’ll beat me in that respect.”

Solskjaer knows United need to ensure that Dave signs a new contract. If we’ve any hope of progressing and competing in the future, keeping the best goalkeeper in the world would be a wise decision.

And, it’s not as if Real Madrid are knocking for his signature like before. They signed former Chelsea shot-stopper Thibaut Courtois last summer and are unlikely to be in the market for another keeper.

So, the ball is in our court. Dave wants to stay at United and we simply need to match his wage demands. Mendes probably wouldn’t be demanding near £400,000 per week had United not overestimated Alexis Sanchez a year ago from now.