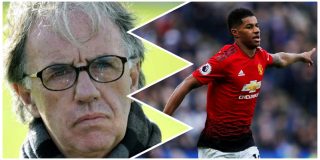 Manchester United take on Southampton in the Premier League on Saturday.

The aim for caretaker manager Ole Gunnar Solskjaer will be to get back to winning ways at Old Trafford after last weekend’s scoreless draw with Liverpool.

United have a number of injuries to deal with, though the match day squad shouldn’t change too much from Wednesday night’s trip to Selhurst Park.

Marcus Rashford came on as a substitute despite playing 90 minutes with an ankle injury three days prior to the game. He could have done with a rest but Solskjaer decided to give him minutes against Palace in place of Alexis Sanchez.

BBC Sport pundit Mark Lawrenson predicts a 2-0 home win for the Reds and expects Rashford to be fit.

“Marcus Rashford came off the bench during Manchester United’s win over Palace on Wednesday, so he should be fit for Saturday,” the former Liverpool player told BBC Sport.

“Despite all of their injuries, United are still in a good moment. Their best results so far under Ole Gunnar Solskjaer have come away from Old Trafford but I would expect them to win this game easily enough.

“Saints got the win they needed against Fulham on Wednesday but they still have a lot of work to do to climb away from the relegation zone and I cannot see them getting anything here.”

I wouldn’t write off any team we come up against between now and the end of the season. Southampton face a tough relegation battle and there will be games, possibly against the top teams like United, that they’ll play out of the skin and grind out a result. It happens so United cannot afford to be complacent.