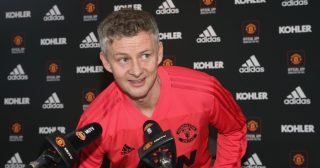 Two months on and even in Ole’s wildest dream could he have envisaged the position he now finds himself in. With his ears still ringing from Sunday’s electric atmosphere against Liverpool, the Old Trafford faithful gave an emphatic endorsement to Solkjaer’s permanent appointment as manager of Manchester United, and many pundits suggest that he is now favourite for the job.

Amidst the wave of new found optimism and in the after-glow of another fine away win it is difficult to have foreseen back in early December that it would be Ole Gunnar Solskjaer leading a charge for a top four spot. Consigned by José to the realms of the miraculous, qualification for the Champions League is now in our hands. So how have we got here and what have we learned so far from Ole’s tenure at the wheel?

In retrospect it seems an obvious move, bring in a beloved club legend, support him with a tried and trusted assistant, keep the pick of the talent amongst the back-room staff and with Sir Alex as Consigliere, the package is complete. It is all about re-setting and returning the club to the traditions and outlook that have formed the foundations of United’s success over the past five decades.

The truth of the matter is that the team was never as bad as was often being portrayed in the media and in reality not quite as good as recent results may suggest. The key difference is that United are improving and that was something that was clearly not happening with Mourinho under whom we looked to be going in the opposite direction. We all know the reasons for José’s demise, the toxicity around Carrington is well documented and his ultra-specialised approach to games cleared stifled the team and went against the grain of the attacking football fans demand.

Ole has instilled freedom into the squad, he has given players the latitude to actually enjoy being a young multi-millionaire footballer playing at the top of his profession. The result has been fewer goals conceded and critically many more scored. Entertainment starved fans are now looking forward to going to Old Trafford again and not dreading it, so it is no coincidence that the atmosphere has ramped up as expectation has replaced trepidation.

For his part Ole has impressed pundits, not just with his attacking brand of football but also with his tactical nous as well. Only Tuchel’s PSG have tactically got the better of Solskjaer’s rejuvenated United, and performances away against Arsenal and Chelsea have been typical of a mature approach to games, where we have been breaking at pace and posing defences all kinds of problems with Pogba in particular excelling in an attack that carries much more potency.

Defensively the line is considerably less porous with seven clean sheets since the start of the year, the contrast with the first half of the season could not be more pronounced. Lindelof is rapidly developing into the player we hoped he could be, and looks to be forging a formidable relationship with Chris Smalling. With Bailly back in the fold and Shaw going from strength to strength the focus now is on the right-back position which now looks to be the most exposed. We have seen that when players are given regular opportunities their confidence grows and so you have got to think that it cannot be too long before Dalot gets a chance to claim that spot.

The only other game where the team seemed devoid of ideas, until the last ten minutes, was the home game against Burnley. There was a tangible sense of bewilderment on the concourse when fans realised that Pereira had been selected ahead of Herrera, a decision that returned to haunt Ole when the Brazilian was caught in possession in the lead up to Burnley’s opening goal. It seemed an opportunity to ‘double down’ against opposition who at the time where struggling for form. It was perhaps too early to be thinking about resting players.

As yet the most high profile player Solskjaer has failed to get the most out of is Alexis Sanchez, however by backing Rashford and Martial the truth is that Sanchez has continued to play a bit-part since he lost faith with Mourinho. He hasn’t had the games to develop the consistency of the likes of Pogba and Shaw, who themselves have felt the critical attention of the media. With the current spate of injuries Sanchez looks likely to get a run in the team and it is really make or break for the Chilean, who almost certainly will be allowed to leave in the summer unless there is a dramatic return to form.

After a very tentative and nervous first few encounters with the press as Gaffer, Ole is developing his confidence and has certainly gained plaudits from pundits impressed with his approach both on and off the pitch. He is determined to stake his claim to be the next permanent manager and I think from the outset he has seen this a longer term opportunity. Ole has clearly taken a blue-print from Sir Alex and is developing his own brand of attacking football. It is apparent that youth team starlets will get their chance, with Chong, Gomes and Garner early beneficiaries from Ole’s desire to look beyond May.

The coming weeks will tell us more about his future as a Premier League manager, with an injury crisis forcing his hand, we will see how Ole is able to adapt in the face of key games in the battle for Champions League football. Solskjaer is in pole position, and with further wins against Arsenal and Chelsea would be represent a significant move towards qualification. Ultimately I think that this has got to be the key equation to seal the deal, if results fade away then this must open the door for another suitor but at the moment it looks like Ole’s to lose and with the fans right behind him, who would bet against him?