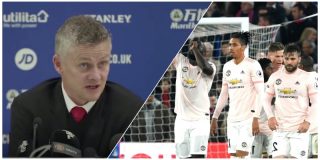 Luke Shaw vs Crystal Palace – the boy is coming of age!🔥🇾🇪

The boss believes Shaw can play in a more attacking position, but did so from his usual role as left-back, especially for Romelu Lukaku’s first goal when he drifted up the pitch and almost into the Palace box.

Solskjaer was also impressed with how his players reacted to conceding as they kept the controlled and pushed for a third goal rather than panic.

Now attempts will be made to make Shaw an even better player.

“We want him to go forward,” Solskjaer told the press, as quoted by the Manchester Evening News. “That’s the next step for him as well, to trust himself more often going forward. But, then again, it was down to the shape we played today because Anthony wasn’t fit.

“We played Alexis inside more with Rom, and it worked well with Diogo as the wide right and the winger on the other side.”

🗣️ “Three points at Selhurst Park is never a given.” 🏟️

With Tottenham losing to Chelsea last night, United are now just 5 points behind Mauricio Pochettino’s men in the Premier League. That gap is tight and when you consider Spurs were title contenders not long ago, set to becoming the first team in history to finish third in a two-horse race, it just shows the level of consistency Solskjaer has brought to the club.