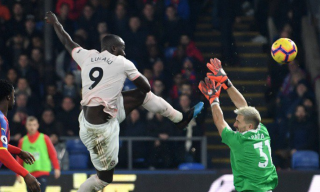 Manchester United returned to winning ways in the Premier League on Wednesday night after beating Crystal Palace 3-1 at Selhurst Park.

Romelu Lukaku scored a brace and Ashley Young got the third which secured three points against the Eagles.

Here are some observations we took from the game.

Lukaku looks determined to fight for his place

Wednesday night showed exactly the sort of response you want from a player who has just lost his place in the team. You might not see Lukaku ever winning back his place as centre-forward with Marcus Rashford showing excellent form and clearly more suited to the style of play we’re seeing under caretaker boss Ole Gunnar Solskjaer, but competition can bring the best out of players and the Belgian striker could have a big role in achieving our objectives this season.

NEXT: Italian reports claim Man Utd have made held talks for 19-year-old wonderkid

There will be times when Rashford is injured, suspended or in need of a rest and United may need to call upon someone else to win games. If Lukaku can do what he did against Palace last night to other teams in the league, it might be enough to persuade the gaffer to split the role between the pair, depending on the opponent and tactics, to ensure he gets the best out of a good situation.

But it hasn’t been a great season for Lukaku, has it? A shadow of his former self, so hopefully this isn’t a once off, and Rom shows he won’t go without a fight.

Ole can adapt to difficult situations

The baby faced assassin continues to prove his credentials to United fans and the Old Trafford hierarchy.

Palace away is never an easy trip for United, it often throws up moments of unrest, but Ole came away with three points after a solid performance, despite being without NINE first team players.

The Norwegian improvised by selecting both Diogo Dalot and Ashley Young in his line-up, but that call gave us an advantage against Palace star player Wilfred Zaha.

Previously, this man has shown away to Arsenal and Tottenham that he can tactically get one up on fellow managers Unai Emery and Mauricio Pochettino.

We’re starting to see that wasn’t a fluke or part of some honeymoon period now. Solskjaer looks the real deal.

United’s win over Palace kept the Reds in the top four hunt, but has third place become a possibility?

Spurs are imploding, even that Chelsea side beat them midweek.

And they face rivals Arsenal this weekend who could go one point behind them in the league with a win.

United shouldn’t have any difficulty against Southampton and could potentially go two points behind Spurs by the end of the weekend.