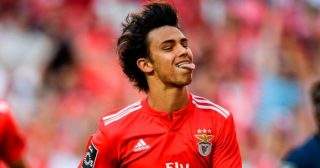 Joao Felix reportedly has interest from Manchester City too, who are also claimed to have met with the Portuguese club this week, with Juventus arranging talks today.

He has emerged as one of the most sought after talents in Europe this season and was reportedly subject of a January bid worth £61 million from Liverpool, as reported by Portuguese newspaper Correie da Manha.

NEXT: Ashley Young thanks Man Utd fans for fantastic support home & away

At Benfica this term, Felix has developed into one of the first names on the team sheet and has even emoted striker Jonas to the bench. He has scored 8 goals in 15 league appearances since the beginning of the season.

Everything is pointing towards a big summer move for Felix and even though United are not openly in the market for a playmaker, this might be a player we don’t want to miss out on.

An outcome of the meetings has yet to be revealed but clubs like United and Juventus will be meeting with plenty of people between now and the summer about potential signings.