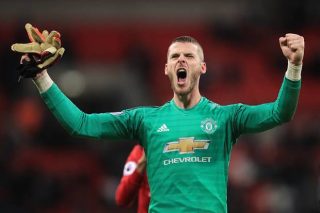 David de Gea wants to remain at Manchester United and is on the verge of committing his long-term future to the club.

According to Daily Mail reporter Adam Crafton, De Gea’s agent Jorge Mendes is still putting the final touches to his client’s new bumper deal, though his client has made his mind up about staying at Old Trafford after his current contract expires.

The report states Mendes is trying to get De Gea a wage package worth £375,000 per week to make him the highest paid goalkeeper in world football, while United have offered £350,000.

Real Madrid’s interest in De Gea has yet to be rekindled after the acquisition of Thibaut Courtois last summer. The Spanish giants gave up on the long pursuit for his signature.

The Mail adds that De Gea is not understood to want to move to Paris Saint-Germain, who will soon be looking to replace the legendary Gianluigi Buffon.

Mendes is trying to get as much money possible out of United, who made transfer flop Alexis Sanchez their highest paid player last year. Agents will continue to do that until United get rid of the Chile international, so don’t be surprised if Paul Pogba is next to ask about new terms…

If the Reds are to emerge as a major force in English football, keeping hold of De Gea is absolutely essential.