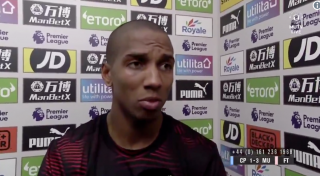 Ashley Young wanted to thank fans for their non-stop support with his celebration after scoring the third and final goal against Crystal Palace in a 3-1 win. The England international has described the process of decision-making when receiving the pass out wide from Paul Pogba, which will go down as an assist.

The full-back was in between two minds. To strike the ball first time or to take a touch.

He started by praising United’s support at Selhurst Park.

“I keep saying week in, week out they’ve been fantastic home and away,” Young said, as per the Manchester Evening News. Again [against Palace] they were brilliant from the warm-up right up until after the game.

“I think that showed in the celebrations, every player is thankful for them. Obviously travelling down midweek is not easy, it’s tough. Luckily for us we’ve been able to put on a performance for them to be able to go home smiling.”

For all the stick Youngy gets, he’s always the first to show appreciation towards United fans, and you can tell he goes mental whenever his name gets on the scoresheet. He loves scoring goals and last night’s finish gave us a much-needed two goal cushion.

Describing what went through his head just before he scored, Young said: “I saw the space open up and I was just waiting for Paul to pass it. I didn’t know whether to take it first time or take a touch. I took the touch and after that, it was just head over the ball, hope for it to end up in the back of the net. Thankfully it did and that was it, the game was over after that.”