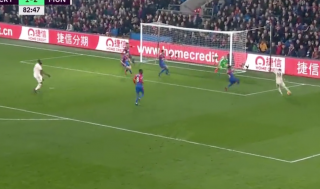 The goal came from a classic United counter-attack, with Paul Pogba feeding in the England full-back to drive home from close range.

United had been under significant pressure after the deficit was halved following Joel Ward’s goal.

However, Young’s strike looks to have all but sealed yet another victory for Ole Gunnar Solskajer, who has yet to lose a Premier League game in charge at United so far.

Check out Young’s finish in a slick United team move below: