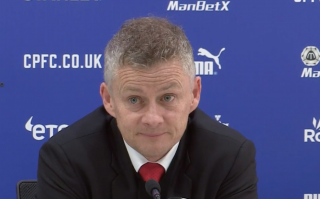 United were without eight senior first team players against Roy Hodgson’s Palace side, but quality still shone through as Romelu Lukaku’s double and Ashley Young’s late strike were enough for victory. United had been put under pressure in the second half after their lead was cut down to one following Joel Ward’s finish.

Solskjaer was quick to praise Lukaku after his double helped secure all three points.

“Lukaku had two good goals and his link up play was very good too, he is working hard in training and has been playing well. He’s had to play wide for me and had many defensive duties so I’m happy for him playing as a number nine,” Solskjaer told the BBC.

“It’s always good to see players taking their chance. that’s what it’s about at this club, when you get your chance, grab it,” the Norwegian added.

Solskjaer was  pleased with United’s performance after being forced to put out a weakened team due to the club’s recent injury crisis.

“It’s a great away win. We controlled it well. That’s a few away wins on the bounce, Fred and Scott McTominay haven’t played much and we got another debut for one of the kids coming through too in James Garner.

“It’s Manchester United, we do have a quality squad and quality players and we will continue to bring players through. Every team in the league will have injuries at this time of the season.

The Reds remain in 5th place, just one point off fourth placed Arsenal in the race for the Champions League positions. Next up is Southampton at Old Trafford on Saturday, followed by the daunting task of overturning Paris Saint-Germain’s two goal lead next mid-week.