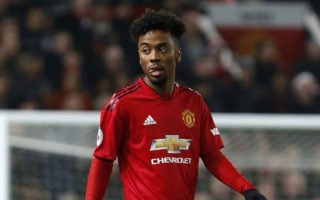 Welcome to our latest feature called Question Corner! You ask the questions and we do our utmost to provide the answers on all things Manchester United.

Thanks to everyone who send their questions in via Twitter using the #askMUFC hashtag. This week we focus on summer transfers, whether Angel Gomes will make it, and what the future holds for certain defenders at the club.

#askMUFC
If #MUFC are only able to sign 3 players in the summer, which positions would you prioritise?

Since it’s the first week of Question Corner, we expected a question or two on transfers.

We will try our best to mix it up each week but you can’t blame United fans for being excited about our prospects for the future after the recent turnaround under Ole Gunnar Solskjaer. If he can do this with a crop of players who looked completely flushed under José Mourinho, how well can he do with his own additions?

That gives away who we think will be the manager next season and we understand Solskjaer already has an input on the upcoming transfer window, which is enough to suggest he will be in the hot seat beyond this season.

To answer Jonathan’s question, however, the positions United should prioritise this season shouldn’t come as a surprise. It doesn’t take a rocket scientist to note our need for a new centre-back, and I’m not talking about some unproven kid who has what it takes to be the next Rio Ferdinand. We need quality and we need it now.

United also need a new midfielder and a specialist right-winger. We’re unaware if the club has identified a midfielder yet, or if they even plan on scouting for that position, but it’s necessary if we plan on reaching the summit of football again.

Lastly, I’m liking the idea of Jadon Sancho coming from Borussia Dortmund. It would be a pricy acquisition but a good right winger would make the Reds potent in attacking, especially with Anthony Martial attacking from the left and Marcus Rashford playing centrally. Those three speedy forwards in the same attack would cause havoc for defenders.

#askMUFC do you think Gomes has a realistic chance of making it?

It’s tricky to answer a question like this without seeing a lot of player in the first-team. Then, you ask is that because he’s not quite there yet and, of course, not every youngster will reach the required standard.

I like Gomes. He’s a tricky playmaker who is versatile and his minuscule size could be an advantage considering by the time he’s in his prime, football will be a non-contact sport.

Making it comes down to a number of factors. Is he dedicated and willing to put in that extra mile at training? How does he respond to constructive criticism from his coaches? Not to mention how many youngsters had their careers turned upside down by injury. Let’s hope that won’t the case for Gomes, and he gets a chance in the team at some point.

We may see him involved against Crystal Palace tonight and revisit this question at another point because the jury is still out.

Going back to our answer for the first question, I’d seriously consider getting rid of Alexis Sanchez, freeing up some of that wage money, and signing a potential star like Sancho.

Sanchez is the epitome of a stale relationship now. The spice is gone, surprises are no more, and the best days are behind him. It’s time to dump him for something new and exciting.

United were sold a dud and I have little optimism about his chances in the team now so many key players are injured. I’d rather see Tahith Chong given a chance.

#askMUFC
What does the future hold for Man United defence? The likes of Chris Smalling, Jones and Young are obviously way off the mark.

Well, all three players have signed new deals at United.

Their futures seem to be at Old Trafford — for one year at least, as far as Youngy is concerned.

However, I can’t see United falling short on signing a top centre-back again this summer, and would be surprised if none of the current defenders left as a result.

United have tried selling Marcos Rojo in the past, Matteo Darmian is surely on his way out, and the jury is still out on Eric Bailly.

I just hope the club doesn’t go into the market penny pinching. If United are to challenge for league titles and European success, then the club must operate like the biggest club in the world, something Ed Woodward and co like to boast about despite a worrying lack of success on the pitch in recent years.

Sadly for them, you can’t win the Champions League with commercial growth or by showing how many sponsors your acquired over the past 12 months…