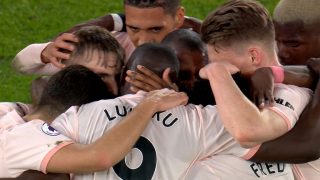 The strike was Lukaku’s 9th Premier League goal of the campaign, having struggled for form for most of the season.

Lukaku had earlier missed a fantastic opportunity to open the scoring, blazing Luke Shaw’s corner over the bar from point blank range.

NEXT: (Watch) Romelu Lukaku bags with superb finish against Palace

Though the pair would combine once again, and after Shaw’s adventurous run, the ball fell to United’s Belgian centre forward who slotted the ball home cooly with his weaker foot.

Crystal Palace have also missed a hatful of chances this half, most notably Jeffrey Schlupp who almost capitalised on United’s lazy defending to equalise almost immediately after United’s opener.

Shaw’s run and lukakus finish, is the definition of liquid football

What an assist from Luke Shaw btw 👏🏼 guys been unreal this season.. not being chosen for the world cup was definitely the best thing for him!

With his assist vs Crystal Palace, Luke Shaw has now assisted more than once in a Premier League season for the first time in his career #mulive pic.twitter.com/nq8aaM3Pd9

🗓 Romelu Lukaku scores his first goal for Man Utd since the 5th January!

What a good goal from Lukaku- great performance so far from a very understrength team!

Watching Lukaku's goal again, Shaw gets the ball just inside the Palace half and goes past three of their players on his way into the box. That opens up the space for Lukaku and it's a great take. #ufc

Lukaku badly needed that goal, especially after that awful miss. Really tidy finish and hopefully that gives him a shot of confidence. Tough game and Palace dangerous on the break. 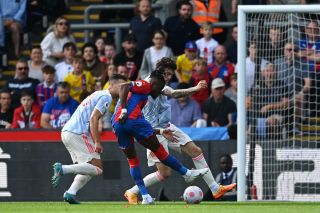