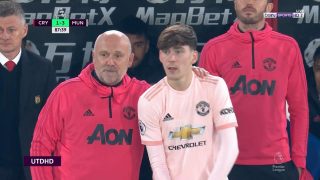 Manchester United’s 17 year old midfielder James Garner became the club’s 230th academy graduate to play for the first-team after making a substitute appearance in the victory over Crystal Palace.

Garner came on in place of the underwhelming Fred in the final moments of the game, to see out yet another win for United under interim boss Ole Gunnar Solskjaer.

The Norwegian boss has certainly kept to United tradition since taking charge, having also handed Tahith Chong his debut in United’s victory over Reading in the FA Cup. Chong was an unused sub in tonight’s game.

Garner had been compared to current coaching staff member and United great Michael Carrick, as per Manchester Evening News by Solskjaer in the run up to tonight’s 3-1 win.

It’s an incredible achievement for Garner and fans will hope they haven’t got to wait too long to see him get more minutes on the pitch.