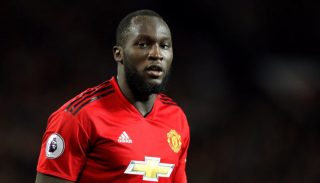 Another game and another anonymous performance from Manchester United’s number nine.

Romelu Lukaku just can not find his place in the post José Mourinho era.

He is looking like an analog player in a digital world.

Played on the wing and in the middle of the Reds forward line, Lukaku has struggled to look comfortable in the more mobile offensive unit.

Jesse Lingard and Juan Mata have played as False Nines to great affect and caused problems for all our opposition bar Paris Saint-Germain.

Rom has looked like a False Nine for different reasons.

Marcus Rashford has switched, like Lukaku, from playing out wide to a central attacker. Neither positions have dampened his influence.

Rashford and Lukaku have, of course, two different styles of play but it’s the formers willing and approach to the required positions that has been the real difference.

Rom’s contribution at The Emirates in the FA Cup tie against Arsenal shouldn’t be overlooked but it’s the lack of movement and overall contribution that’s infuriating.

Not only is his lack of goals alarming, but in the last two games he has started he has registered only two efforts on target. That’s not good enough.

Against Chelsea, in the second half, when we really needed someone to hold up the ball and he lost every battle.

Alexis Sanchez replaced him and held up the ball and drew fouls that relieved pressure on the team.

Lukaku has scored two goals in the Premier League since Solskjaer took over.  The injuries are now mounting up after the Liverpool game at the weekend so he will have to be centre stage for United’s front line for the forceable future.

If not now, when is going to be the right time to shine for Romelu Lukaku?

The path has been cleared for a performance we really need this week against Crystal Palace. You would expect Arsenal to beat Bournemouth at home on Wednesday after leap frogging us in to fourth place on Sunday.

United play the Gunners on the 10th of  March in what could be a crucial fixture in the race for fourth place.

Romelu Lukaku has shown in past that he has what it takes at the highest level. It just looks like he has left those performances behind and never adapted. United’s overall play is much quicker and Lukaku seems to be the only one still suffering from a Jose hangover.

Laboured and lumbering would perfectly describe Mourinho’s tenure at the Theatre Of Dreams and Rom embodies all of that.

It seems a lack of urgency and concentration are too far embedded in to his approach. Ole’s upgraded fast, incisive football doesn’t mix with his style.

On the positive, Romelu is a striker and all it takes is a few goals here and there and we are looking at a different man. If anybody can pull that out of him, surely it’s the baby faced assassin.

Paul Pogba is flying, Sanchez is a close friend and hopefully now, with all the injuries, Rom, Pogba and Sanchez can conjure up some much needed magic Wednesday night and beyond.

Sixteen league goals last season, eight this season and a successful World Cup on top of that shows that Lukaku is more than capable of being the main man. For large parts of last and this season he often looked isolated up front on his own. He isn’t always involved in the build up play but his crosses from out wide are very good. His cross for Jesse Lingard’s winner at home to Chelsea last season, his passing for the goals (mentioned above) away to Arsenal and his pass to Lingard on Sunday for the chance well saved by Alisson show he has something else to add. For me though, he is on back foot way too often and reacts far too slowly. His much talked about touch deserves criticism in the modern era of being a professional footballer.

What can we expect in the coming weeks? There is no room for error in our pursuit of fourth place and the FA Cup. The Champions League never seemed a realistic target and even less so after the first leg against PSG.

Rom’s faults all seem solvable and looking at the form of the reinvigorated players in the squad, time is running out for those who are not up to standard or can keep up.

There have been rumours of a move away from the club but who in this current crazy transfer market is going to pay what United will want? Are the Reds really ready to part ways with The Big Belgian?

An opportunity has knocked for Lukaku, let’s hope he grabs it and never lets go.