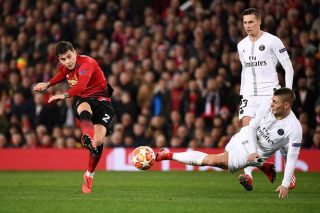 Amid a swashbuckling start to what looked to be a stellar season, Mourinho’s United were neck-and-neck with City at the summit of the Premier League. A trip across the Pennines to newly promoted Huddersfield should not have set too many alarm bells ringing. 23 minutes into the game, Phil Jones – in a familiar tale – limped down the tunnel, and off the bench in his place stepped a young, tattooed, rough-around-the-edges ball playing centre back by the name of Victor Lindelof.

A £31m signing, as per BBC Sport, he came from Benfica with a big price tag and even bigger expectations.

Lindelof’s United career hit a nadir that day. Two costly errors led to two Huddersfield goals within ten minutes of his arrival and left the Swede at the mercy of a bloodthirsty and unforgiving media who were baying for his blood. The Swede was culpable for both Huddersfield goals as United lost, turned inside out by Tom Ince in the build up to the first and misjudging a high ball to let Laurent Depoitre in for the second.

He continued to drift in and out of the team and, although there were flashes of defensive brilliance, the doubts did not dispel and Mourinho never seemed to fully trust or believe in his expensive new recruit. But if a difficult debut season in England proved a test both mentally and physically for Lindelof, then he could not have wished for a better summer. He helped Sweden top their difficult World Cup group and go as far as the quarter-finals for the country’s best performance for 24 years and in his entire lifetime.

High on confidence after a strong and eye-catching World Cup with a Sweden side hardly littered with big name stars, combined with the important learning curve of his settling-in season, Lindelof was ready to come of age.

There were up and down moments earlier in the season – he was even dropped briefly in early December but then perhaps no United player can be fairly judged on the torrid final few months of Mourinho’s reign. But, right now, Lindelof is one of the first names on the team sheet and seems likely to stay there, probably for years, if he continues his current form and develops further as expected.

The brutality of that day at Huddersfield and the south coast struggles of Brighton back in August seem a world away now. Growing in confidence, maturity and stature by the week, Lindelof has been, without doubt, United’s most improved player. The pick of our bunch both home and away against the might of Juve’s Old Lady, he was immense again versus Liverpool and helped to render their formidable front three almost anonymous. The Reds new found defensive solidity under Ole Gunnar Solskjaer has become as much a part of his Old Trafford identikit as free-flowing fluidity. Lindelof has become the bedrock on which that miserliness is built. He is a man on top of his game and is looking like the player we all hoped he would be, well and truly living up to his appropriate nickname of the Iceman.

Victor Lindelof has gone from expensive outcast to indispensable and long may it continue.