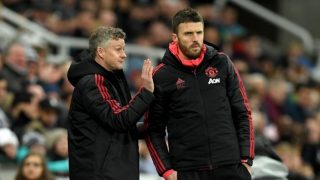 Ole Gunnar Solskjaer addressed the press on Tuesday ahead of Manchester United’s trip to Crystal Palace.

The interim boss provided an update on the injury crisis, made worse on Sunday against Liverpool when United were forced into making three substitutes before half-time to accommodate injuries to Juan Mata, Ander Herrera and Jesse Lingard.

Meanwhile, Marcus Rashford played on despite nursing a knock in the opening minutes of the game following a nasty lunge by England international Jordan Henderson.

The manager sees this injury crisis as a chance for fringe players to perform and give him something to think about when all the absentees return.

“Well, the three we had to take off [vs Liverpool], they’re not going to be ready,” said Solskjaer on MUTV.

“We’ve not really had a session yet, so I don’t think there are a lot of positives. Matteo [Darmian] trained the other day, but I don’t think he’ll be ready yet because he trained yesterday Marcos [Rojo] has been training, so hopefully, he will be involved.”

Rashford, on the other hand, is being treated after suffering an ankle injury but Solskjaer refuses to totally rule him out of the game.

Considering he just fought through 90 minutes against the Scousers with an injury, it would be best to rest him against Palace, even if Solskjaer is told he can play.

“We’re still waiting to see how his ankle is responding to the treatment,” Solskjaer added.

“With the muscle injuries, that’s still early to think about. He might have a chance of playing. Then again I don’t think there’ll be anyone else coming back for this game. So there’ll be a chance for the kids.”

And, it sounds like Angel Gomes, James Garner and Tahith Chong will all be part of the squad.

“The kids are joining in today,” Solskjaer continued, as per Manchester Evening News. “They’ll be involved in the squad. They’ve been part of our training for a long time.

“Angel has been in that successful team with England U17s, the 2000 team with Sancho, Hudson-Odoi and that Foden and, he’s been a big part of that. Angel has definitely shown he’ll do well.

“James Garner is a Michael Carrick, but 20-years younger, so I’m sure he’ll do well. And Chongy will definitely be taking people on if he comes on. They’re ready, the kids, it’s hard when if you’re a defender if you’re 16 or 18 but as an attacker coming on you go out there and express yourself. There’s your chance, they can win the game, not lose it.

“We’ll have a good team on the pitch, there’ll be a chance for others. I’ve been sat on the outside getting a chance when this happens. Scott and Andy (Pereira) did fantastic, that’s the way it is. You’ve to to be ready when you get it.”

What line-up would you pick against Crystal Palace?