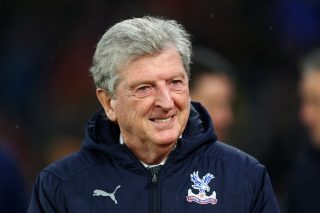 Crystal Palace manager Roy Hodgson is looking forward to the game at Selhurst Park on Wednesday night but is aware of the challenge they face against a formidable team.

The former England manager praised Manchester United interim boss Ole Gunnar Solskjaer for his impact which has rejuvenated the players from a sorry spell under José Mourinho.

Hodgson claims to understand the situation his team are about to be in when they face United.

“I’m looking forward to it but I’m very wary of the fact that this is Manchester United,” the Palace manager said, as quoted by Sky Sports. “This is a team that in their last 11 league games they’ve only managed to draw twice and win the other nine, so it’s going to be a very, very tough ask for us but at least we go into the game after a good victory ourselves.”

Palace got a great result at the weekend, beating Leicester City 4-1 away from home, with the Foxes now searching for a new manager. Claude Puel has been replaced by former Liverpool boss Brendan Rodgers, who has left Celtic midway through a title race, as per BBC Sport.

And, Roy, an incredibly experienced coach, has been impressed by Solskjaer’s efforts as United manager, with the Norwegian becoming a stronger contender for the full-time position.

“If we are going to get a result in the game on Wednesday night it will be a massive feather in the cap of Crystal Palace football club because I can’t remember too many of our victories against them.”

What result are you predicting tomorrow night? Jamie Spoor, who covered this week’s match preview, called a 1-1 draw.

While Selhurst Park is a bogey ground for United, I don’t think we will drop points but The Eagles won’t make the game easy either. They will put up a fight and make it a tricky occasion. We must remember they’ve got a bit going forward now, with a striker in Michy Batshuay who can make things happen centrally, unlike Christian Benteke.

That was a real area of concern for Hodgson’s side and they will hope Chelsea loanee Batshuay can prove to be the missing part of the jigsaw. You never know, come the summer with Chelsea’s transfer ban, they might be call upon the Belgian when Gonzalo Higuain returns to Juventus when his loan contract expires.

Make sure to follow the blog for updates on the game.