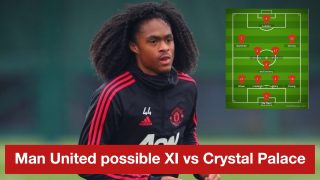 Manchester United executing a draw against fierce rivals Liverpool, given the injury crisis which confronted the side in the first half, entailed one of the most pleasantly surprising performances of Ole Gunnar Solskjaer’s miraculous tenure as interim manager, encompassing spirited individual performances with tactical organisation to prevent Jurgen Klopp’s rampant outfit from creating chances at Old Trafford.

As brilliant as it was, though, the result was not enough to keep United in the top four, with Arsenal inching ahead of the Red Devils and Chelsea within passing distance if Maurizio Sarri’s men win their game in hand.

Now travelling to contest a stubborn Crystal Palace outfit, and doing so with injuries to multiple key players, Solskjaer faces a deceptively tricky task to pull off a result and keep pace with rival sides.

Reaching 100 Premier League clean sheets for Manchester United after being almost entirely untroubled against Liverpool, De Gea will yearn for 101 against Crystal Palace, with only four players ahead of him in the all-time league statistic.

Young’s presence in the side is almost beyond doubt at this point, regardless of the quality of his displays. Diogo Dalot could benefit from a chance, but with forced squad rotation to occur in other areas of the pitch, that is unlikely.

A player who is now developing into one of the most important in United’s setup, Lindelof is also staking his claim to be the Red Devils’ player of the season with each passing match. His presence in the side is as close to guaranteed as it can possibly be at this point.

Eric Bailly is probably the favourite to pair Lindelof in Solskjaer’s first-choice defence given his age advantage, but Chris Smalling’s consecutive irresistible performances against Chelsea and Liverpool warrant a third consecutive start in London.

Easily the man of the match against Liverpool after shutting down perennial threat Mohamed Salah, Shaw’s defensive nous are leading him up the charts towards the elite Premier League fullbacks and he will be looking to continue his progressive rise against Palace.

The unlikely heroic performance that emerged from McTominay after what could be a lengthy injury for Nemanja Matic, as per Sky Sports, was impressive enough that the Scotland international should play the next match regardless of the fitness of United’s other midfielders.

Seemingly an outcast in the side after Solskjaer opted to introduce Andreas Pereira instead of him against Liverpool, Fred needs a chance to explain exactly why this isolation has occurred, and this match could be the perfect opportunity. Pereira’s display over the weekend was as error-free as it was uninspiring, but it would be no surprise to see him start instead.

Leadership will have to exude from the seasoned Frenchman, who proved his credentials for the task of guiding inexperienced midfielders in United’s season opener against Leicester City. It will be interesting to see whether Pogba still performs to his usual standard given the uncertainty in the side, but if his Liverpool cameo is any indicator, there will be no discernible difference.

Barring a miraculous return to fitness, Wednesday’s match could finally be the day for Tahith Chong to make his full United debut. While the Dutch winger is a very raw talent, his quintessential wide threat style makes him the unproven version of the player that has been missing on the books for many seasons now.

Playing in a variety of positions other than his own to enable Marcus Rashford in recent matches, an unfortunate injury to the academy graduate should give Lukaku the opportunity to prove he can still be a Manchester United striker. With a player of Chong’s nature supplying him from out wide, his season may yet bear new fruit.

Improving vastly against Liverpool after a heavily criticized Champions League display against Paris Saint-Germain, Sanchez will see this as one of his last chances to rejuvenate his Premier League career before Anthony Martial returns from injury into his place.