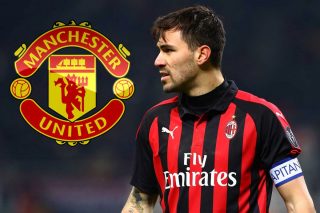 Manchester United are reportedly preparing a bid for AC Milan captain Alessio Romagnoli and are set to battle with Chelsea and Juventus for the defender’s signature.

That is according to Italian outlet Calciomercato, and it fits the club’s objective to sign a new centre-back in the summer.

Romagnoli, who replaced Leonardo Bonucci as captain of the Italian giants, has risen to prominence in recent seasons, playing an important role to keep Milan in the top four of Serie A.

Manager Gennaro Gattuso won’t want to lose one of his key players but may have to face what could be the inevitable, with the likes of United, Chelsea and Juve all interested.

Mind you, something tells me Chelsea won’t be putting up much of a challenge for Romagnoli’s signature…

The 24-year-old looks set to be become one of many defensive targets for United this summer.

That said, the return of Chris Smalling joined by the rise of Victor Lindelof has seen the Reds keep three consecutive clean sheets, but that is unlikely to change anyone’s mind that we need to improve defensively.

Napoli’s Kalidou Koulibaly is a popular choice. ESPN’s Rob Dawson claims United are waiting till the summer to pounce on the Senegal international.