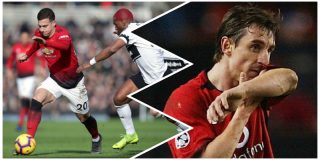 Diogo Dalot is pleased with comparisons being made with him and former Manchester United captain Gary Neville.

The young Portuguese full-back joined the club last summer after making just eight senior appearances at FC Porto, but there is no hiding his potential, and former manager José Mourinho was first to compare him with the United legend.

While he has not yet cemented a regular place in the first-team, Dalot knows he must be patient and work hard towards developing further as a player, especially if he plans on being a long-term success at Old Trafford.

It should be deemed a positive that he’s reacted to comparisons with Neville by stating he wants to make history of his own.

“[The comparison] brings responsibility, but I wouldn’t accept it if I couldn’t be at the top, and for me it’s a pleasure being compared to those types of players,” Dalot told Sky Sports.

“They are words of Mourinho, I need to build my own history here and that’s to always keep improving, and hopefully I can be here for many years to play for United.”

Dalot signed a five-year contract in the summer after costing United a fee of £19 million, as per BBC Sport.

Reflecting on his first season as a United player, Dalot added: “It’s a massive learning curve. I think the first part of the season was tough because I had injuries, and I only started playing and training with full fitness from December on.

“This year was a learning year for me, and I will keep learning more until the end of the season. [I’ve learned] more mentally to be ready for this kind of situation, to get an injury, to not play, to start getting fit again. For me, to learn that was a big achievement, and I think I am doing pretty well.

“I’m enjoying it. I came to this club and knew it would be difficult for me, I have good players in my position and I can learn a lot from them. I think I can have the opportunity to play many, many years here.”

Ever since Ole Gunnar Solskjaer arrived as caretaker manager Dalot has made four starts under the Norwegian, and game time between now and the end of the season will be valuable towards his chances next term, when he will hopefully kick on and take Ashley Young’s place at right-back.

He says the biggest change under Solskjaer has been the atmosphere in the dressing room, which says a lot about Mourinho’s management, if you look at it that way.

“The biggest difference was the atmosphere we had inside the locker room. I think the tactical parts too, the game we are playing, we play more to the forward part, so I think we changed a couple things and hopefully we can still change a little bit more because we are not perfect.

“It wasn’t wrong, but I think when you change coach there is something which changes for itself, it’s nt something about the coach, something [you think]: ‘We changed the manager, OK, now we need to change ourselves, too.’ I think we changed for better, when we get the results we’ve got.”

Would you start Dalot on Wednesday night against Crystal Palace?