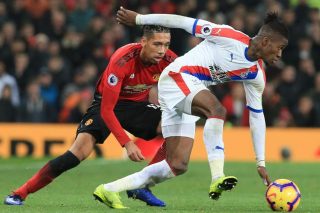 Manchester United’s interim manager Ole Gunnar Solskjaer will turn to youth with the Reds in the midst of a full scale injury setback.

The Reds are set to be without ten players for a tricky-looking trip to Selhurst Park to face Roy Hodgson’s in-form Eagles. The tie pits Solskjaer, at 46 the second youngest boss in the league, against former England manager Hodgson, the oldest at 71.

Hodgson has overseen a remarkable turnaround in fortunes for the south London side who were bottom having set an unwanted record of seven games, seven losses and no goals when he took over from the hapless Frank de Boer 18-months-ago.

The same could be said for his opposite number Solskjaer, having transformed a season that was going nowhere into one of real promise. That promise will be tested to the full, here, though, with an injury list as long as both of your arms.

Ander Herrera, Anthony Martial, Jesse Lingard, Juan Mata, Phil Jones and Nemanja Matic are all ruled out, while Marcus Rashford (ankle) is a doubt. Martial is nearing full fitness and could make his comeback against Southampton at the weekend, as per the club’s official website.

Matteo Darmian and Antonio Valencia remain absent, but defender Marcos Rojo is set for his first involvement of the season.

This all opens the door for the next generation of Old Trafford talent, with teenage trio James Garner, Tahith Chong and Angel Gomes to travel to London but prolific 17-year-old striker Mason Greenwood is sidelined. Garner, Chong and Gomes were left out of the Under 23 match with Reading yesterday, strongly hinting at their senior call-ups.

With his offensive options severely depleted, Ole Gunnar Solskjaer has called on Alexis Sanchez and Romelu Lukaku to “step up and play to their potential”, according to BBC Sport.

For Palace, centre back Mamadou Sakho will miss Wednesday’s game because of the knee injury that forced him off against Leicester. Fellow defenders Martin Kelly and Aaron Wan-Bissaka will be assessed.

Despite the crippling injuries which wouldn’t look out of place on Casualty, United boss Solskjaer was in jovial mood. When asked if he could play in the match, Ole told Sky Sports: “I don’t think age is the problem, the problem is my fitness, but maybe we could ask Michael (Carrick, coach) if he can dust his boots off.

“We’ve not had a session yet, so I don’t think there are a lot of positives, no. I don’t know the list [of players] that’s supposed to be injured, Matteo [Darmian] trained the other day, I don’t think he’ll be ready, [Marcos] Rojo will be involved, Rashy we’re still waiting to see how his ankle is responding to the treatment, muscle injuries are too early to think about. That’s it. Luckily at centre back there are quite a few fit ones, Victor (Lindelof), Chris (Smalling) and Eric (Bailly), the three of them are ready,” Solskjaer added.

Milivojevic: “We are so happy and so proud to have Roy Hodgson with us, we can learn a lot from him. I think he’s the most intelligent manager in my career and all credit to him. We’re going to continue to fight for him because he deserves it.” pic.twitter.com/0HZEpzfMt5

United would normally be strong favourites to overcome Crystal Palace, but our raft injuries makes this harder to call than you might think. The Selhurst Park side have never beaten the Reds in the Premier League era, but will never get a better opportunity to do so here. We don’t know what team Solskjaer will put out, and I actually think the hosts will get something from this one. Selhurst Park is always a difficult place to go, and, exacerbated by ankles, knees and hamstrings, United will drop points.