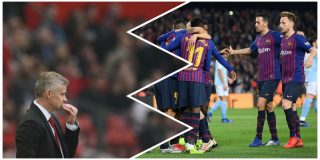 Barcelona midfielder Ivan Rakitic has been linked with a move away from Camp Nou with the summer arrival of Frenkie de Jong made official.

The Croatian has expressed his wish to stay with his current club, but is flattered by the clubs linked with him in the gossip columns, which includes Manchester United.

If anything, he is amused by the rumours surrounding his future.

“I want to stay. I’m flattered that big clubs ask about me, if they do, but I only see myself at Barca,” Rakitic said of the rumours, via Sport.

“I laugh a little bit in the morning with my coffee when I see [the stories] about my future.”

Rakitic has been an important figure in the heart of midfield for Barcelona since joining the Catalan giants from Sevilla in 2014, where he also witnessed European success.

He succeeded club legend Xavi as the creative spark in Barca’s midfield and talk of him being sold would suggest he is under-appreciated by some people within the club.

According to 90min, Rakitic was persuaded to stay at Barcelona by manager Ernesto Valverde last summer after an offer came in from Ligue 1 champions Paris Saint-Germain.

Rakitic would be a huge addition to the United midfield, and The Sun recently reported that we would have to spend £108 million to bring the Croatia international to the Premier League.

The report adds that Inter Milan and Bayern Munich are also keen on a move for Rakitic.

It is difficult to predict the outcome of this saga. The player has made it clear he wants to stay at Barcelona, but they’ve just spent a lot of money on a younger alternative with De Jong set to arrive from Ajax.

The club could see a big offer come in for Rakitic and tell him they no longer need his services as it’s probably the best time to cash in.