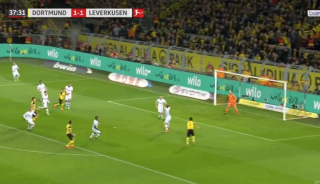 Formerly of Manchester City’s academy, the 18-year-old has won many plaudits since moving to Germany to build his career.

According to The Sun, Manchester United are lining up a £70 million move to secure his signature, with Ole Gunnar Solskjaer allegedly having a say on the pursuit.

That could see BVB make an incredible profit on Sancho, who cost them just £8 million in August 2017, as per The Guardian, which is a testament to the club’s model.

The England teenager not only netted his ninth goal of the season on Sunday, Sancho also created an assist for Dortmund’s opener through Dan-Axel Zagadou. BVB are now three points ahead of Bundesliga champions Bayern Munich, who beat Hertha Berlin 1-0 at the weekend.

Being an England international, there’s a chance Sancho will return at some point, but it would be nice to see United make a move now and get the player early to watch him develop with us rather than raise his value elsewhere.

United need to sign a right-sided specialist to even out the side’s attack. As things stand, we’re very reliant on Anthony Martial coming from the left and have no-one of similar quality running at defenders on the opposite flank.

Sancho is worth keeping an eye on. We could be watching him regularly next season.

Report on BVB’s win over Leverkusen – here, as per the Daily Mail