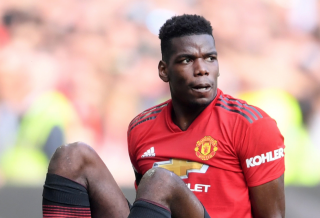 BBC Sport pundit Garth Crooks presents his team of the week which includes two Manchester United stars after a home draw with Liverpool on Sunday.

While we were favourites leading up the Premier League meeting, injuries changed that and the game itself. It’s disappointing when you reflect on how bad Liverpool were.

Both were excellent against the Scousers, though another United player should feature at left-back. Luke Shaw was top drawer and kept Mohamed Salah in his pocket throughout the game.

The Sweden international has become a revelation under caretaker boss Ole Gunnar Solskjaer.

I’d go as far as saying he’s quickly becoming one of the best defenders in the Premier League.

And, it’s no wonder to see him selected in the BBC Team of the Week following Sunday’s performance. Lindelof was class once again

“The fact that four Manchester United players suffered first-half injuries against Liverpool – with three of them having to be substituted – and yet still came away with a clean sheet and a point against Liverpool is bordering on the miraculous,” says Crooks, as per BBC Sport.

“The United fans were amazing and kept their depleted team going as they spent much of the match under the cosh. I thought Victor Lindelof was a rock – amazing. Without a doubt, he is United’s most improved player this season.”

It wasn’t his best performance, but Pogba had an important role to play in the absence of his two midfield partners. Nemanja Matic picked up an injury in training on Friday and Ander Herrera was the first United player forced off on Sunday.

Immediately, I thought we were in trouble until it became clear Pogba took it upon himself to carry out more defensive opportunities. He had little choice in the matter, but it’s great to see such an elegant classy football put in a hard shift to help his teammates. Pogba showed a great degree of maturity.

He’s not a selfish p***k like many like to suggest. Even Crooks, who has been very critical about Pogba in the past, has become a fan!

“I am starting to become quite a fan of Paul Pogba. Yes, I know it’s a bit embarrassing for me, especially after the chasing I gave him all last season. But the World Cup success on his CV, and in particular since the departure of Jose Mourinho, Pogba has struck form that must rank him as one of the top five midfield players in the world.

“In a United side ravaged by first-half injuries, his performance was immense. This was Pogba playing for Manchester United in a way I hadn’t seen him before. He’s become a grown-up.”