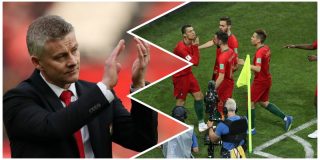 Manchester United are considering a move for Sporting Lisbon midfielder Bruno Fernandes, according to reports.

The attack-minded midfielder, who operates best as a roaming no.10, has recently been linked with a move to Liverpool but could join United instead if the latest reports are to be believed.

According to a report by A Bola, cited by the Manchester Evening News, the Reds are interested in the 24-year-old and want to sign him at the end of the season.

We usually take transfer rumours from the Portuguese press with a pinch of salt, but we’d be surprised if Fernandes wasn’t at least on the club’s radar, considering our need for a quality midfield or two in the summer and his incredible season to date.

He has scored 22 goals while contributing 11 assists for Sporting since the beginning of the campaign.

There aren’t many teams that would turn down a player capable of playing a role in that amount of goals per season, and he’s young enough to suggest his best years are ahead of him.

Obviously, he’s playing in a league some way off the Premier League’s standards, but his numbers show that it’s time to make a step up.

And, there is no mention of Sporting playing hardball. It is suggested that they are open to selling their best player should an acceptable offer come in and aid their recent financial problems.

Below, you’ll see his best bits. He has great technique, vision and is very dangerous from dead-ball situations.