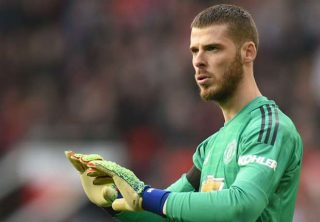 David de Gea had little to do in the scoreless draw against Liverpool on Sunday but still managed to reach an incredible record of keeping 100 clean sheets in the Premier League.

Adidas, the leading sponsor of De Gea, reacted to the milestone by sharing a hilarious graphic on Twitter referring to washing powder.

The 28-year-old keeper then took to Twitter to thank United fans for the atmosphere claiming he is proud to reach 100 Premier League clean sheets.

Proud to hit 100 @premierleague clean sheets today in the unbeatable stadium that is Old Trafford. What an atmosphere 🔥💪🏻 #MUFC pic.twitter.com/CaRT2cBMRA

Liverpool only managed one shot on target throughout the game and played a number of long balls with little success.

Dave became the seventh shot-stopper to achieve this feat with one club, while there are 15 keepers in total with 100 or more clean sheets in the Premier League.