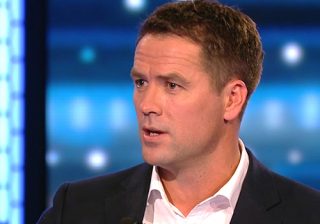 Michael Owen made a disgraceful comment on before the second-half began at Old Trafford today.

The former England international, who played for both clubs during his career and now acts as an ambassador for Liverpool, showed terrible sportsmanship with his analysis.

United suffered an injury crisis in the first-half which forced Ole Gunnar Solskjaer into making three substitutions. With that in mind, he had to leave an injured Marcus Rashford on the pitch, despite the striker’s struggles after straining his hamstring.

Owen suggested that the Liverpool players should target Rashford, knowing United were unable to make another substitution: “First person, first opportunity, go and kick Rashford on the ankle.”

How ironic is this coming from a footballer who had horrid luck with injuries throughout his career?

Well, to be fear, I had little sympathy for Owen before this.